The System Usability Scale (SUS) is a standardized metric for measuring the usability of a website or other interactive system. Long a favorite among UX researchers for its simplicity and accuracy, SUS is a valuable quantitative tool for anyone trying to optimize the user experience.

SUS uses a short, 10-item questionnaire administered at the end of a usability test to calculate a website's score. Users respond to each question on a 5-point scale from “Strongly disagree” to “Strongly agree.” These answers are then used to generate an extremely reliable overall usability score for your site. 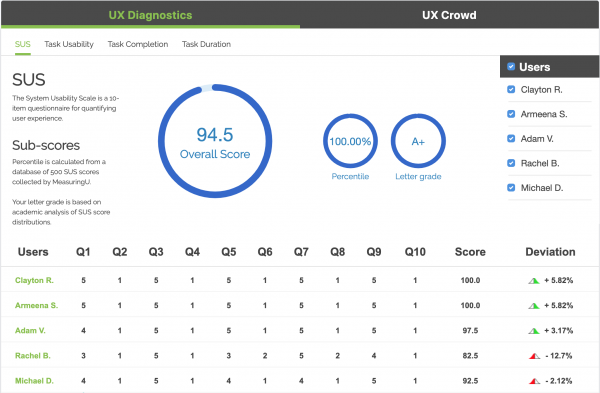 The questionnaire consists of the following 10 items:

Based on different studies, the mean SUS score is around 68-70.5. If your score falls close to this range, you can assume that your website‘s usability is about average.

Some researchers have attempted to map adjectives like “excellent,” “poor,” or “worst imaginable” to different scores for an additional level of insight. For example, a 71.4 (just above average) corresponds to “good”: better than an “ok” 50.9 score, but falling short of an “excellent” 85.5.

Another way to add meaning to your SUS score is to turn it into a percentile ranking. By comparing your results against hundreds or thousands of scores collected in other usability studies, you can contextualize your site’s performance relative to the rest of the web. So for example, an average score of 70.5 is in the 50th percentile (better than half of the sites tested) according to our database of 500 websites. 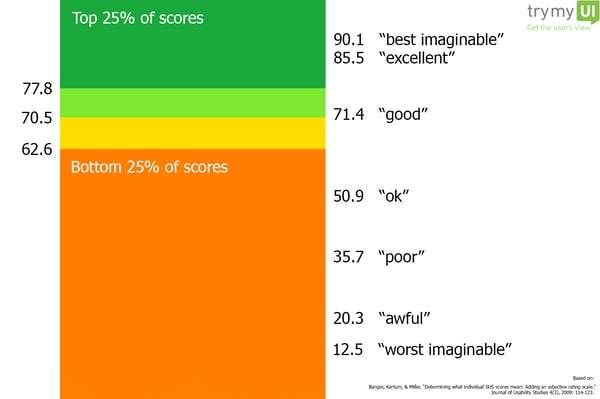 Though described by its inventor as a “quick and dirty” measure, studies have found SUS to be among the most accurate and reliable of all usability surveys, across sample sizes. It is now one of the most popular metrics for quantifying system satisfaction, with thousands using it to gauge user-friendliness over a wide range of products online and off, especially for e-commerce UX.

All these qualities make SUS a valuable tool for standardizing a diverse mix of tester feedback, and aggregating responses into a meaningful, but concise, picture of your UX. If individual test videos are the trees, SUS shows you not only the forest, but the entire ecosystem. With a widely-trusted industry standard to rely on, you can take a step back from your own company and see how you chalk up in the broader world around you.

SUS can also be great to use in tandem with A/B Testing, for both websites and mobile apps!

See the forest through the trees with 5 FREE tests

How does SUS differ from other psychometrics?

The SUS is the absolute baseline for all usability testing. Every product at some point in its development will have benefited from a SUS score. Unlike many other psychometrics, the SUS boasts great reliability in its relative simplicity.

Here's a list of the other psychometrics on the TryMyUI platform and why they might be a better alternative to the system usability scale depending on your situation.

PSSUQ:
The PSSUQ and the SUS are fairy similar, widely-utilized psychometrics that have been around for decades. The key difference for deciding between the two comes down to your specific use-case: are you testing a very specific, scenario-based product that you already feel is usable? If so, PSSUQ offers much more nuance than SUS and could be seen as a more specialized version for a more complete product.

Take a look at our in-depth comparison: The SUS and PSSUQ: Quantifying user experiences.

ALFQ:
The Adoption Likelihood Factor Questionnaire is meant for early stage development products or to gauge a general interest in the product. While ALFQ does measure some aspects of usability, it isn’t for sophisticated usability and usefulness research in the way that SUS or PSSUQ is.

SUPR-Q:
Jeff Sauro’s Standardized User Experience Percentile Rank Questionnaire measures more than just usability or satisfaction, tapping into the heart of the user’s more abstract thoughts of a product such as trust and credibility. One notable consideration is the brand context: SUPR-Q is best utilized for established companies that users are familiar with, and whose designs have already been through rounds of SUS and/or PSSUQ testing to see if the designs are on-brand.

SRS:
The Survey Respondent Scale is the brainchild of a partnership between TryMyUI, MeasuringU, and QuestionPro to address the cognitive stress and fatigue of survey responses on testers. SRS is an extremely specialized metric that is meant more for marketing than usability.